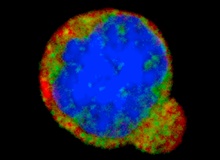 Stem cells in the bone marrow provide a life-long supply of blood and immune cells. If they display defects – either caused by hereditary diseases or blood cancer – the transplantation of bone marrow cells of a suitable donor is often the only therapeutic option. To avoid rejection of the transplanted stem cells, the patients immune response needs to be dampened. The consequence: Bacteria and viruses have an easy time. Especially infections with the highly prevalent Cytomegalovirus are a leading cause of clinical complications – ranging from graft rejection to life-threatening disease. Scientists of TWINCORE and the German Cancer Research Center have now switched prespective: They investigated the influence of virus infections of bone marrow donors on the success of a transplantation. Their – striking – results were recently published in „Cell Reports“.

In brief: The health of the donor is just as important as that of the recipient for the success of a bone marrow transplantation. „However, our study does not focus on the impeccable health of the donor at the time of the bone marrow donation – since this is a pre-requisite and thoroughly checked for“, states Dr. Christoph Hirche, a former scientist at the Institute of Experimental Infection Research at TWINCORE – now at the Heidelberg Institute for Stem Cell Technology and Experimental Medicine (HI-STEM). „We have investigated the long-term effects of past, subsided virus infections on bone marrow stem cells.“ Specific focus was laid on the least differentiated and most long-lived stem cells, so-called „long-term stem cells“. These cells are resting under normal conditions, divide rarely and therefore represent a ‚backup’ of the blood-generating system. They are only activated in highly critical situations, where they produce an increased amount of differentiated cells to help counteract life-threatening bottlenecks of the blood and immune system.

The scientists could show that not every virus infection that elicits a release of type I interferon automatically activates the resting bone marrow stem cells – but when it happens, it has substantial impact on the transplantation success: When transplanting stem cells which were activated by a Cytomegalovirus infection „we observe that these stem cells do their job much less efficiently – they don’t differentiate as balanced and reliably as they should“, states Dr. Christoph Hirche. „Truely striking, however, is the observation that bone marrow cells continue to show functional deficits for weeks after the acute infection. Even though these stem cells look as if they have completely ‚recovered’, they replenish the blood and immune system less efficiently and show an altered differentiation profile.“ An effect that made sense once the scientists not only looked at complete bone marrow populations, but also at single stem cells: These cells retained signs of an inflammation on a genetic level for weeks.

How strong does a virus infection in humans need to be to wake long-term stem cells from their resting state and to long-lastingly influence them after the acute phase of infection? This remains an open question. „But what we do know is that, in the future, the infection background of potential stem cell donors needs to be investigated more carefully“, emphasizes Prof. Ulrich Kalinke, head of the Institute of Experimental Infection Research. „The success, or failure, of a bone marrow transplantation is obviously also dependent on the infection record of the donor, not just the current health status of the recipient. These are important revelations for clinical transplantation medicine.“