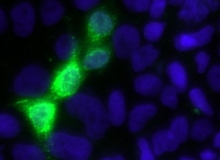 The green immunostaining of the hepatitis E virus capsid protein in the placental cells indicates the replication of the virus in these.

Hepatitis E virus infections are usually subclinical and are considered as an underrated disease by physicians. The number of infections worldwide is estimated at 20 million infected people per year. In our latitudes, primarily people with weakened immune systems get sick. In Asia and Africa, however, a different genotype is present, which is a serious threat to a very special population group: pregnant women. One in four pregnant women dies there as a result of a hepatitis E infection. Scientists at TWINCORE have now investigated the differences in regional hepatitis E types in order to explore treatment approaches against this highly dangerous variant for pregnant women. With their investigations, they first developed a cell model with which they can test drugs for their suitability against hepatitis E. The project was funded by the German Center for Infection Research (DZIF).

The genotype 3 hepatitis E virus in our region is mainly transmitted by undercooked pork, while the genotype 1, which is widespread in Asia and Africa, is mainly transmitted by feces. This is a major problem, especially in crisis areas: after the earthquake in Nepal in 2015, in Syrian refugee camps, in military camps - everywhere, where many people live in confined spaces under poor hygienic conditions, the hepatitis E virus spreads. "Seen in purely medical terms, it is actually no hepatitis virus," says Leonard Knegendorf, "because it affects not only the liver, as the name hepatitis suggests, but also other tissues." Leonard Knegendorf studies medicine, is a junior scientist in the research group Virus Transmission at the Institute for Experimental Virology of TWINCORE and has focused on the placenta as a target of the hepatitis E virus for his research. "Since we wanted to investigate why pregnant women in particular are at such high risk, we have focused on the crucial difference between the affected groups and that is the placenta."
The scientists have infected liver and placental cells with the two hepatitis E genotypes and observed that the viruses of both types multiply in both liver and placental cells, the genotype 3 virus even in both cell types equally well. "For the first time, we were able to show virologically that hepatitis E replicates in the placenta," says principal investigator Prof. Eike Steinmann.
In the next step, Leonard Knegendorf tested antiviral drugs on infected placental cells: ribavirin, sofosbuvir and interferon. "However, these drugs are not approved for the treatment of pregnant women," he says. "We wanted to know if there was a difference in the effects in liver and placental cells." And there is: While ribavirin and sofosbuvir equally repress the viruses in both cell types, interferon is still able to conditionally inhibit the industrialized countries variant, genotype 3. In contrast, interferon has no effect on the genotype variant 1, which is so dangerous for pregnant women. "Because interferon is not just a drug but, most importantly, our body's first response to virus attacks, it could be the key to differentiating between the relatively harmless genotype 3 and the dangerous genotype 1 infections," says Leonard Knegendorf.
"These new findings help us to find new drugs for hepatitis E infections in pregnant women," concludes Eike Steinmann. "We will now first test all medications already approved for pregnant women on placental cells infected with hepatitis E. If among the thousands of drugs, we find a hit that prevents the virus from multiplying, the path to a drug that helps the pregnant women is not far away."