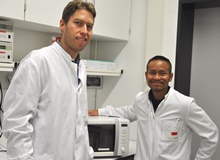 Infections with hepatitis C virus (HCV) and human immunodeficiency virus (HIV) among people who inject drugs (PWID) are a global health problem. For example, sharing of drug preparation equipment within this population contributes to more than 80% of newly acquired HCV infections. As a response to these circumstances, scientists at TWINCORE validated a simple and safe method to reduce the risk of viral transmission, namely by microwave irradiation. This method has been published recently in Scientific Reports.
“The initial idea for this project came during a telephone call with Pedro Mateu-Gelabert, a New York based Senior Researcher with whom we have worked with for a long time already”, recalls Eike Steinmann, head of the Research Group Virus Transmission at the Institute for Experimental Virology. “He asked me, whether it is possible to treat the potential contaminated drug equipment with microwave irradiation to inactivate HCV and HIV. Everybody in the USA has a microwave oven…” The project idea was born, the microwave oven was quickly bought in an electronics shop and brought to the laboratory. A simple and safe method to inactivate these viruses is important for two reasons: First of all, the risk of blood-borne viral transmission is extremely high within the drug injection community through sharing of drug paraphernalia. On the other hand, the available regimens for the treatment of HCV infection are very expensive and most of the time, an infected drug addict has limited access to the medication. Moreover, those treatments do not protect against re-infection.
The principle of microwave irradiation is based on the excitation of water that results in heating of the whole sample. “Since we knew from the previous study that HCV is temperature-sensitive, the microwave approach was very promising”, says Anindya Siddharta, scientist in the research group. Indeed, two minutes of irradiation at 360 watt is sufficient to inactivate HCV particles in solution. In cooperation with the research group Innate Immunity and Viral Evasion, TWINCORE, they extended the experiments to HIV, as one out of three people who are infected with HIV are also HCV positive. This approach resulted in the same findings. Higher power levels and lower irradiation time, however, could not inactivate the viruses. “Less than two minutes is not sufficient reach the critical inactivation temperature.”
Aside from virus containing supernatants, the TWINCORE-scientist also tested this method in the presence of street heroin to assess whether heroin plays a role in the virus infectivity. “A further important point for the daily application of microwave oven in the drug injection community is the treatment of drug preparation equipment”, highlights Eike Steinmann. In addition to syringes and spoons, these include small cigarette filters, which are used to draw the heroin preparation into the syringe. This trick avoids clogging of the needle with any impurities. These filters – since they still contain residual heroin – are often reused and shared. Thus, these filters bear the greatest risk of infection, but, “both filters and syringes, are no longer infectious after three minutes at 360 watts in the microwave, even if they are dried for 24 hours”, say Eike Steinmann. “The only limitation is the metal needles of the syringe, which of course should not be heated in the microwave oven. They should be disinfected using other methods.” The irradiation of the filter takes a little bit longer so that the heat could be distributed to the entire filter. After three minutes of irradiation, filters and syringes are free from infectious viruses and the risk of infection with HCV or HIV can be prevented in this way.