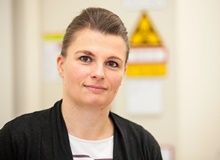 How do cells sense and combat a retroviral infection? The newly funded DFG-Priority Programme „Innate Sensing and Restriction of Retroviruses“ will address this central question during the next six years. One of the currently most important retroviruses is HIV, and thus represents one of the most studied pathogens within the Priority Programme. The HIV specialist of TWINCORE, Christine Goffinet, obtains € 200.000 in the first funding period for the project „Characterization of the effectiveness of the cGAS-mediated DNA sensing pathway in primary HIV-1-infected CD4+ T-cells”.

“The aim of the Priority Programme is a better understanding of the cell-intrinsic innate immunity against retroviruses, which could enable the development of new antiviral vaccine and treatment strategies”, says the leader of the Research Group Innate Immunity and Viral Evasion. “Here at TWINCORE, we aim at a better understanding of the role of interferons in the course of HIV infection.” She is focusing on a recently discovered cellular alarm system, based on the DNA sensor cGAS. This protein detects cytosolic DNA as a danger signal, followed by induction of antivirally acting interferons. “This alarm system works perfectly fine in human T-cells challenged with DNA“, says Christine Goffinet. “However, DNA produced in the course of an HIV infection largely fails to trigger this antiviral response. We now plan to analyze consecutive steps of this signaling pathway in order to elucidate how HIV-1 evades it in T-cells.”